A Little Gingerbread and Hello 2011!

First and foremost, HAPPY NEW YEAR. Can you believe it’s actually 2011 already? I can’t. Not one bit. 2010 was so full of change, excitement and adventure that it truly flew by. And now we have officially entered the big year: graduation year. EEEEK!

So I’ve been a little MIA lately, to say the least. This break has just been too much fun and too relaxing (and therefore laziness-inducing), hence my lack of posts. Whoops. Luckily, I have a recipe for you to make up for it! And it’s a keeper.

The other day Buttermilk Bro professed his undying (and unbeknownst) love for gingerbread. Have you guys ever been to Souper Salad? Have you had their gingerbread? If so, you’ll know what he’s talking about. It’s addictive.

Addictive enough to remain in his mind for a few years or more. The Souper Salad we unabashedly frequented near our old home shut 3-4 years ago, and we haven’t been able to find a replacement since. Luckily for B-Bro, I’ve discovered a love for baking in recent months, and his decision to finally make his hankering heard shot gingerbread to the top of my “Baked Goods to Make” list.

A simple Google search and I’d found myself what seemed to be a tried-and-true recipe for the good stuff. You guys can find it here, but I’ll show you the steps below:

Whisk together the dry ingreds.

Between this photo and the next, I added the flour and mixed the dry + wet until thoroughly combined.

Thennn I poured in the hot water. 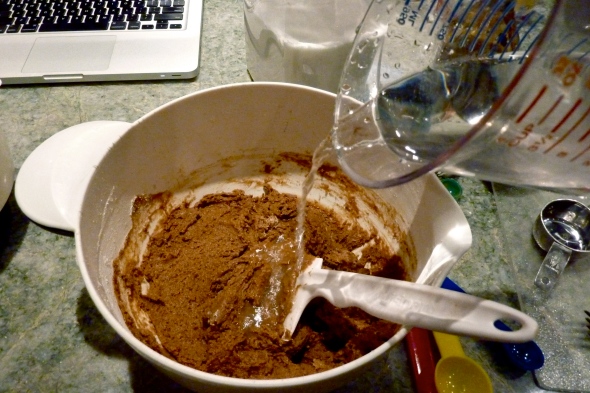 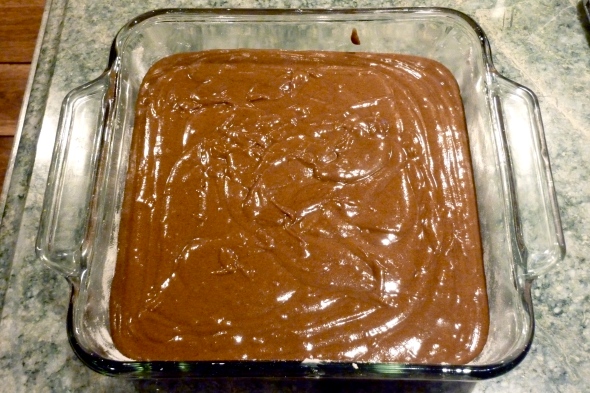 Poured into a greased and floured 8×8 Pyrex. The original recipe called for a 9×9, but this is all I could find. The bread came out pretty thick, but I like that, so it worked for B-Bro (me).

…don’t mind that smudge at the bottom.

Who ate my gingerbread?

I doubt this will last till lunch tomorrow.

The crumb on this bread/cake is smooth and dense. It’s not quite as moist as my pumpkin or banana breads usually are, which means it fills me up more than the other two. (i.e. instead of 4 pieces, I’d be satisfied with just 2). The flavor is spot on, but not exactly the same as Souper Salad. I might try it with oil instead of butter next time–I think that tends to produce a lighter, more delicate bread/cake. Anyone ever had and/or tried to recreate the Souper Salad ginge I speak of? If so, let me know your thoughts!

We watched a grand total of 3 movies today. THREE. First up was The King’s Speech. Oh my goodness it was sooooooooooooooOoOOOOO good. I’m in love with Colin Firth and think Geoffrey Rush is incredible. Second was Yours, Mine and Ours with Lucille Ball and Henry Fonda. Fonda is 2nd in line behind Firth. Or maybe he’s just my 1960s crush. Third and last was Inception, which has forever warped my mind and explains why I’m up at 1am writing to you all. How can you expect me to sleep after that movie? And DREAM?! No. Way. Not going there.

Imma post a few pics from our New Year’s celebration, and a few resolutions I have for 2011…tomorrow. Night night!

One thought on “A Little Gingerbread and Hello 2011!”