Ouch. One outta three, that’s pretty abysmal. It’s been nearly two weeks since I last posted, i.e. I have completely dropped the ball on Rez #3. I think my main problem is that I’m still trying to figure out exactly what kind of blog I want this to be:

a) Healthy-eating oriented? Those are my favorites to read, but what I particularly love about them is that they post most of what they eat each day, which is something I fear I can’t really do while I’m still in school and eating dining hall food (aka PB&Js) most of the time.

b) Baking oriented? I know, I know, it’s in the title, and it’s probably the simplest approach I can take to the blog. I do love to bake, but I’m afraid a large portion of my baked goods go to waste (blame the Boy). Perhaps I could just cut all the recipes in half? And half again?

This is harder than I thought.

My favorite bloggers are the ones who share their lives with us day in and day out. I find it fascinating to read about their daily highs and lows–it makes me feel like I know them in a weird, creepy-stalker-but-not sort of way. And they say that you should base your blog off of blogs you like to read yourself…so I suppose I’ll try!

You guys know my typical breakfast routine. Oats, nuked in a bowl, topped with banana, chia seeds, sweetener, and the obligatory blob of nut butter. Looks a little something like this:

But what about the before and after? Here’s my usual schedule:

7:30-8am: wake up to alarm, pull covers over head, warily open one eye, eventually drag self out of bed

8-9am: make oats, drink coffee (if in the mood–I don’t need this everyday and sometimes it even makes me feel sick? I’m a delicate being) and tons of water, peruse blogs ’til heart’s content

11:30-1pm: sometimes lunch, sometimes work out, sometimes read, sometimes lay in bed and watch reruns of Top Chef. The snow has made me especially lazy the past few days (as has a wee head cold) sooo reruns have been making more of an appearance in my schedule. Thank GOD Marcel and Jamie are gone, that’s all I have to say

5pm-7pm: DINNA, usually in the d-hall

Today I woke up a little later (no class on Fridays, rejoice!) and had Cream of Wheat in the dining hall for breakfast. Topped with some cinnamon, shredded coconut, banana and some PB (crunchy, bleh) and a buttload of salt + Splenda. Who knew Cream of Wheat could be so bland?? The first tasteless bite transported me to my future 90 year old self, bed-ridden and slopping up Cream of Wheat while watching Price is Right in a nursing home, proclaiming that the Cream of Wheat is too flavorful for my two remaining taste buds to handle.

Thankfully the Cream of Wheat was salvaged and actually turned out to be quite delicious! A few slices of fresh cantaloupe and I had myself a well-rounded bfast. Now I’m sitting here writing this, after which I’ll head down to the gym for my quickie 2-mile run. Tomorrow we’ve got 6 miles to do according to the 1/2 marathon training schedule…eesh. I’ve never run that far on a treadmill before.

Note to self: Must. Update. Ipod.

Who? I’m running it with about 20 other girls (in my sorority). In my opinion this is CRUCIAL–we send out motivational emails and share great running songs with each other, and commiserate over our longer Saturday runs. Not only does it make it more bearable, it makes it a wholeeee lot more fun.

When & where? We’re signed up for the NYC Half-Marathon on April 2nd, aka we have about 9 weeks until the race. We all started “training” 2 weeks ago, although the first week was optional for those of us who run 2+ miles on a regular basis.

How? Here’s a copy of the training plan, drawn up by one of our friend’s moms, who has run over FORTY marathons in her life. She seems to think this is foolproof…let’s hope so. 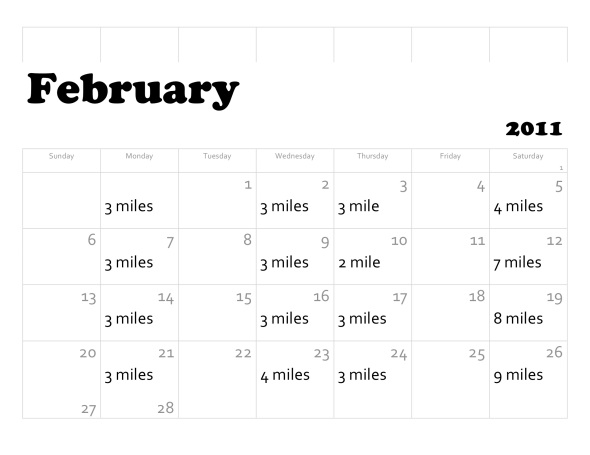 As you can see, some of the last/first days of the months got a little screwy on the Word document, but hopefully you can figure it out. Basically the rubric is to have 3 shorter runs during the week and one long run over the weekend. So far it hasn’t been too bad, but we’ll see come March 20 if I can bring myself to run 6 miles, 6 miles, 5 miles, and 8 miles in one week. Right now it sounds impossible…but at the same time, the thought of being able to conquer something seemingly impossible is so incredibly exciting.

On that note, off to run! Back with recipes and actual pictures of FOOD soon.